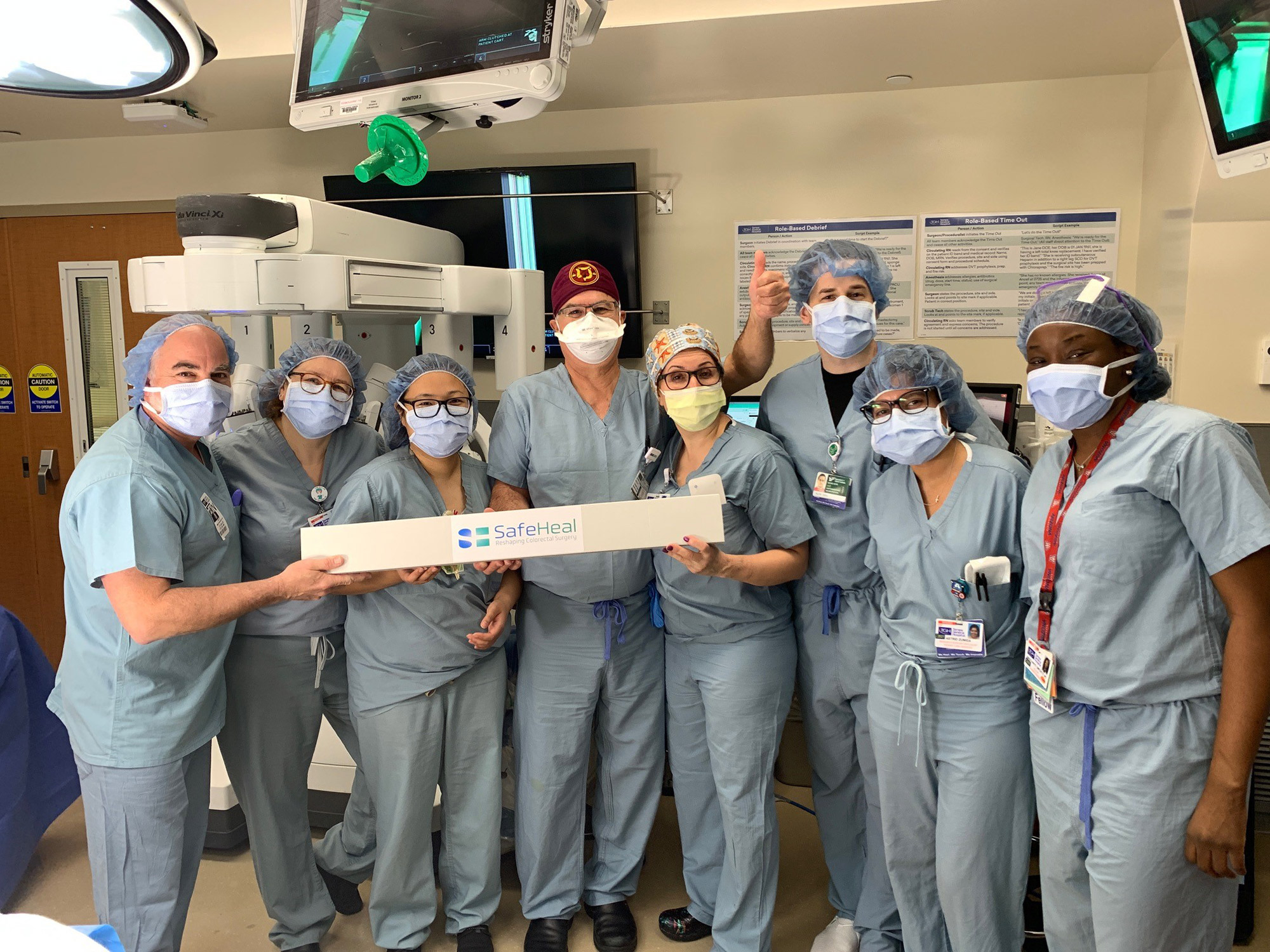 Paris, France, & Guilford, CT – April 1, 2022 – SafeHeal™, a leading innovator in the field of digestive surgery, recently announced the first patient enrollment in its pivotal study of Colovac™, a groundbreaking endoluminal bypass sheath. Colovac is intended as an alternative to temporary diverting ostomy for patients undergoing colorectal resection. Up to 20 U.S. and European sites will enroll patients in the study.

Tampa General Hospital, Tampa, Fla., under the direction of site Principal Investigator Jorge Marcet, MD, professor of the Department of Surgery and director, Colon and Rectal Surgery at the USF Health Morsani College of Medicine and colon and rectal surgeon at Tampa General Hospital’s Cancer Institute successfully performed the study’s first enrolled patient, and the first-ever Colovac procedure in the U.S.

“We are excited to be the first investigative site in the U. S. to enroll patients in SafeHeal’s clinical trial of the Colovac device,” said Dr. Marcet. “Treatment of rectal cancer most often involves radiation and chemotherapy followed by surgical removal of the rectum. Because the risk of non-healing of the bowel anastomosis is high, and the consequences could be dire, the surgeon temporarily diverts the stool from the anastomosis by creating an ostomy. The patient keeps the ostomy for about 2-6 months, and the eventual reversal of the ostomy requires another operation, hospitalization, and recovery period. The aim of the SafeHeal study is to see if these patients can safely avoid an ostomy and avoid additional operations. Our initial experience with this device is positive and we are excited to be able to offer this cutting-edge technology to our patients as part of the study. We are intently focused on providing the safest and most innovative care for patients with colorectal cancer, which is why we are always eager to participate in clinical trials.”

The SAFE-2 randomized controlled IDE study will assess the safety and efficacy of the Colovac endoluminal bypass sheath in adult patients who were initially scheduled to receive a diverting ostomy following colorectal surgery. Diverting ostomy, the current standard of care, is applied prophylactically to most patients today undergoing a low anterior resection (LAR) and anastomosis, due to the high risk of anastomotic leak in this patient cohort. Anastomotic leakage, or an incomplete healing of the anastomosis, occurs in up to 20 percent of patients undergoing LAR.

It is one of the most serious complications of colorectal surgery, frequently resulting in the rapid development of severe peritonitis, septic shock, multiple organ dysfunction, and potential mortality.

“Participating in a study of this caliber for a potentially groundbreaking advance in the care of colorectal surgery patients aligns with our vision to be the safest and most innovative academic health system in America,”Dr. Abraham Schwarzberg, chief of oncology and senior vice president of network development, Tampa General

Following successful pilot studies completed in Europe, SafeHeal will conduct the SAFE-2 study at 25 leading academic medical centers in the United States and Europe. Patricia Sylla, MD, professor of Surgery at the Icahn School of Medicine at Mount Sinai in New York City, is the overall SAFE-2 Principal Investigator. Dr. Sylla serves as a paid consultant to SafeHeal.

“Many of us are very excited about this multicenter, international study that just kicked off in the U.S. The study is designed to evaluate whether most patients undergoing rectal cancer surgery can safely avoid a ‘protective ileostomy’ by having a protective sheath placed instead for just 10 days. If the results confirm preliminary data from Europe, this novel device may alter standard practice, and improve the quality of life for a significant proportion of our patients,” said Sylla.

“The initiation of our SAFE-2 study represents the achievement of a critical milestone in our path to eventual FDA market approval and making a positive impact in the care and quality of life of colorectal surgery patients.”Karl Blohm, SafeHeal CEO

SafeHeal SAS, headquartered in Paris, France, and its wholly-owned U.S. subsidiary, SafeHeal Inc., is a clinical-stage medical device company which develops Colovac, a device invented by a French digestive surgeon, Dr. Charam Khosrovani, to obviate the need for a digestive ostomy in patients undergoing colorectal surgery. Colovac is a flexible bypass sheath intended to reduce the contact of fecal content at the anastomotic site following colorectal surgery. The device is placed endoluminally and is fully reversible. The device remains in place for 10 days, until the body’s natural healing and tissue repair processes are complete, after which it is removed during an endoscopic procedure without the need for a second surgical intervention. This enables patients to resume their normal life without the stigma and complications associated with an ostomy procedure.  Colovac is an investigational device, not currently available for sale.